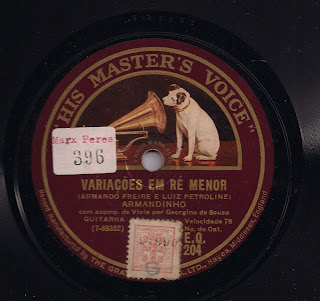 He has been the most important guitar player of all times in Portugal. When you listen anyone of the performances recorded in the 78 rpm that survive till our days, it seems that he is not from this world!
The sound he gets from the guitar is magic and unique.
All the guitar players that use this instrument as a way of living are unanimous, saying that ARMANDINHO was unique!
As Armandinho there are other performers of the portuguese guitar that we will bring here in the next months.
We can give some names only for reference: EDUARDO ALVES, JOÃO MARIA DOS ANJOS, PEDRO D´ARAÚJO, JOÃO PEREIRA DE BARROS, ERNESTO BRANDÃO, ANTÓNIO BROJO, CARLOS CAMPOS, JOÃO DO CARMO and many others.

Here you can listen a track from one album that has been released some years ago, that is for many years out of stock.
You can get all those tracks in this site:www.tradisom.com 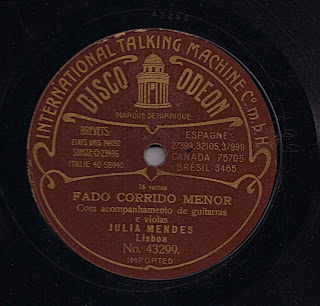 This singer and actress born and died in Lisbon (1885-1911)
Since very young he shows special capacities for singing and acting.
She start singing in the streets of Lisbon begging for some money, because she was very poor.
After some years of suffer she finally gets an opportunity to appear in the theater. She plays then important roles in some "revistas" as Ó da Guarda, P´rá Frente, Zig-Zag, ABC and Sol e Sombra.
AS JULIA MENDES there are much more singers which performances become unpublished for the public in general. We can here give you some names only for a reference: ADELINA FERNANDES, ALICE (do Porto), ALICE PANCADA, ISABEL COSTA, VIRGÍNIA AÇO, LUISA SATANELA,  FERNANDA ABRANCHES, ESTER DE ABREU, HELENA ALÃO, MARIA ALBERTINA, CECÍLIA D´ALMEIDA, ILDA DE ALMEIDA, ESTELA ALVES, MARIANNA ALVES, GUILHERMINA ANJOS, NATÁLIA DOS ANJOS, MARIA ASSALTADA, ALICE LEMOS ÁVILA, LUIZA BAHARÉM, JÚLIA BARROSO, BEATRIZ BATISTA, NATALINA BIZARRO,  LÍLIA BRANDÃO, JULIeTA BRIGUE. This are only a small part of the female singers that we will bring you, showing their records in this blog. 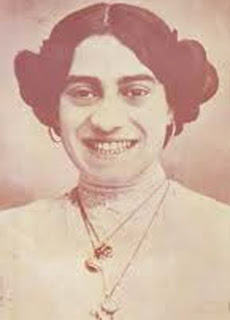 Because she dies very young (only at 26) becomes a kind of symbol for the fado lovers.
Here we give you a song about her in the voice of Maria da Nazaré:

His complet name was Nuno Estêvão Lomelino da Silva  and was born on December 26th 1892 in Funchal, Madeira.
He made his artistic debut in 1916, at the age of 24, when he sang at a charity performance.
When Portugal entered World War I he enlisted and served in the military.
Later on, in the early 20’s he went to Lisbon to develop his vocal abilities, and was a disciple of Professor Alberto Sarti.
Some time later he was advised to go to Italy, the homeland of the bel canto, in order to further his opera studies with distinguished masters such as Giovanni Laura and Ercole Pizzi.
After some time, he made his official debut as a tenor at Teatro Dal Varme, in Milan, on December 31st 1921, interpreting the main role of “Rigoletto”.
On that day a new operatic star was born and from that moment onwards his artistic career grew from strength to strength. His golden voice received enthusiastic applause from different audiences and excellent reviews from the press.
For a few years in a row he performed for several Italian opera companies, both in that transalpine country and abroad, on several tours. During all that time he always returned to Madeira to visit his relatives and to rest in between seasons, and he always made a point in performing at Teatro Municipal do Funchal, where he was cherished by his countrymen.
During the interval of a performance there in the summer of 1925, a tribute was paid to him by means of unveiling a marble plaque with his name, which still exists there.

This song has been published in the CD which cover we show here: 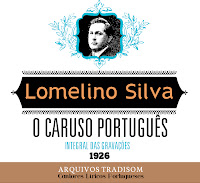 You can get this CD at www.tradisom.com

Here you can listen one of the songs in the CD "questo o quella": 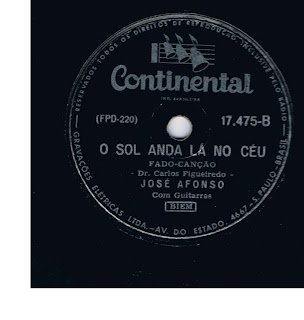 He is considered the most important popular singer of all times in Portugal.
This song "O SOL ANDA LÁ NO CÉU", that we can translate as "The sun is in the sky", has been recorded for the first time by him in 1953.
This was one of the recordings made by him for the label Alvorada, lately reproduced by the brasilian Continental, as shown here.

The lyrics of the song are:

Here we have the sound of this record: 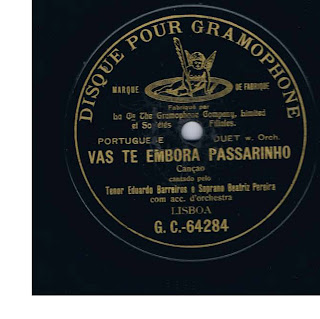 This is a very popular song in the south of Portugal.
In this region of Portugal the poliphonic coral singing, usually only with mans, is very popular. Hundred of groups still exist, specially in the districts of Évora and Beja.
They have a very powerfull presence in stage.
The style of those coral groups is known as Cante and very recently this tradition is preparing to be niminated as Cultural Heritage at Unesco.
Here, in this record the song "Vas te embora Passarinho", which means "Go way little bird" sounds very different because we can listen only two voices, one male singer (Edurado Barreiros) and one woman (Beatriz Pereira). 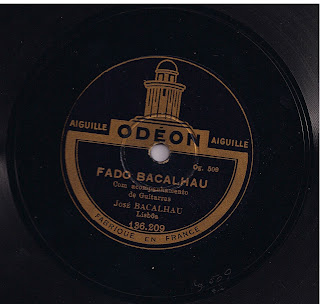 Fado Bacalhau has beem composed by José António Augusto da Silva (1880-1935), know as José Bacalhau. The "Fado Bacalhau" has been writen in the begining of the XX century.
Many "fadistas (or fado singers) perform this fado, as Maria Amélia Proença, Alfredo Marceneiro, Vicente da Câmara or Amália Rodrigues.
The record we publish here today is a very rare item, really very hard to find. We are very lucky because we have samples of it.

We include here a video of this song, recently played by the singer Fernando Maurício: 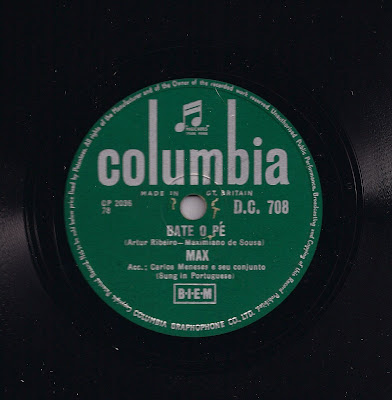 Here we include a video with Max singing BATE O PÉ.